Since introducing its innovative and groundbreaking range of wireless mobile column lifts in 2006, Stertil Koni has transformed the servicing and maintenance of commercial and public service vehicles.

Stertil Koni was the first UK vehicle lift manufacturer to offer mobile lift columns that were fully operational without the need for 3-phase power and interconnecting cables thereby ensuring maximum versatility and flexibility in numerous applications and environments.

Available in capacities from 7,500kg to 17,500kg, Stertil Koni wireless mobile column lifts have been designed and engineered to offer smooth, accurate and controlled lifting. Positioning of the wireless columns is flexible: they can be used in any configuration around a vehicle. Typical installations, involving a set of four mobile columns, enable workshop staff to operate the lifts individually, in pairs or as a set of four. This provides a total lifting capacity of 30 tonnes from a set of four 7,500kg capacity columns. 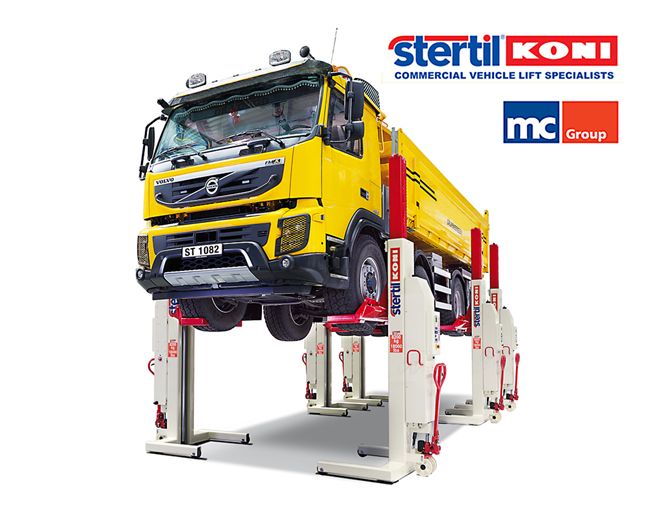 With no cables on the workshop floor, the risk of tripping is removed, providing valuable health and safety benefits and, with no power supply necessary, the system can be used inside or outdoors. Also, the absence of power and communication cables means that set-up time is drastically reduced thereby making the system fully operational much more quickly.

Additional safety is provided for the operator by an independent mechanical locking system that is incorporated into all Stertil Koni hydraulic lifts. This system automatically locks the lift at 35mm increments thereby removing the need for additional support stands that can obstruct operator access under a raised vehicle.

All models are manufactured complete with long-life deep cycle batteries that will power the lifts for at least a week on average before recharging is necessary. The batteries can then be charged overnight via a 230v single phase supply and, as amongst some of the fastest vehicle lifts available, typical lifting heights up to 1.85 metres are achieved in just 70 seconds. Also, the lifts’ unique synchronisation system ensures a smooth lifting and lowering cycle, even in the event of extremely uneven load distribution.

Following the astounding success of the first generation of Stertil Koni wireless mobile column lifts, the company decided that it also wanted to set the ‘green’ standard in the industry by producing an environmentally responsible model – the Earthlift. The result of significant investment in both time and resources, the Earthlift is widely acclaimed as an ergonomically efficient, economically productive and user-friendly model that positively contributes towards the reduction of a business’s carbon footprint.

An important element of the Earthlift’s design is its unique Active Energy Retrieval System, using gravity and the load of the lifted vehicle to retrieve energy and then store it in the batteries of the lift’s wireless mobile columns. The principle of the Active Energy Retrieval System is as brilliant as it is simple - to use the energy generated by the raised vehicle as it comes back down: in other words, to regain the gravitational energy. The new system increases the number of lifting cycles by about 35%, compared to a fully-charged set of wireless mobiles under maximum load. In addition to the reduction in power consumption, the Earthlift’s batteries need less recharging, thus increasing productivity and reducing costs as well.

Initially introduced as a feature of the Earthlift and now fitted as standard on all Stertil Koni wireless mobile column lifts is the eBright smart control system. Incorporating full-colour touch screen control consoles, the eBright smart control system has been designed and developed to simplify operation by providing maximum visual information about every lifting operation - all at the fingertips of the technician. For added safety and performance, the eBright Smart Control System also shows how many columns in the set are being used, the battery status of each column and when the mechanical locks are engaged.

Thanks to the Earthlift’s special characteristics, including bio-degradable hydraulic oil, 98% of it can be recycled at the end of its long life. The combination of this plus the Earthlift’s energy-saving features and Stertil Koni’s high production values, make it the most advanced and sophisticated mobile column lift on the planet.

“Since launching the UK’s first wireless mobile column lifts in 2006, we’ve continued to invest in the range and introduce new models offering enhanced operator benefits,” says Tony Edge, General Manager of Stertil Koni. “Our customers appreciate the design and engineering excellence of the range which, at the end of the day, shows itself in performance, reliability and longevity.”