North Wales Fire & Rescue Service helps to protect an estimated population of almost 700,000 over an area of 2,400 square miles as well as hundreds of thousands of people who visit North Wales every year. The Service employs almost 1,000 staff in operational and support roles and maintains a large transport fleet including 60 fire appliances, one incident command unit and 31 'special' vehicles such as all-terrain vehicles and foam carriers. To ensure maximum efficiency within a fully-equipped workshop located at its headquarters in Llandudno Junction, the Service decided to purchase the two Stertil Koni Earthlifts.

Each Earthlift comprises four 8500kg capacity wireless mobile columns thereby providing a combined lifting capacity of over 34 tonnes. Also, should the need arise to lift heavier or longer vehicles, all eight columns can be used together to double the overall lifting capacity.

The Stertil Koni Earthlifts are used constantly to simplify a wide range of servicing and specialist repair operations involving up to 15 vehicles a month in the workshop. However, as part of the North Wales Fire & Rescue Service’s business continuity plan, these wireless mobile column lifts may be used off site in the event of emergencies such as flooding or power cuts.

In designing and developing the Earthlift, Stertil Koni aimed to set the ‘green’ standard in the industry by producing an environmentally friendly lift. The result is an ergonomically efficient, economically productive and user-friendly model, which contributes towards the reduction of an organisation’s carbon footprint. One of its most innovative features is a unique Active Energy Retrieval System which uses gravity and the load of the lifted vehicle to retrieve energy and then store it in the batteries of the lift’s wireless mobile columns. 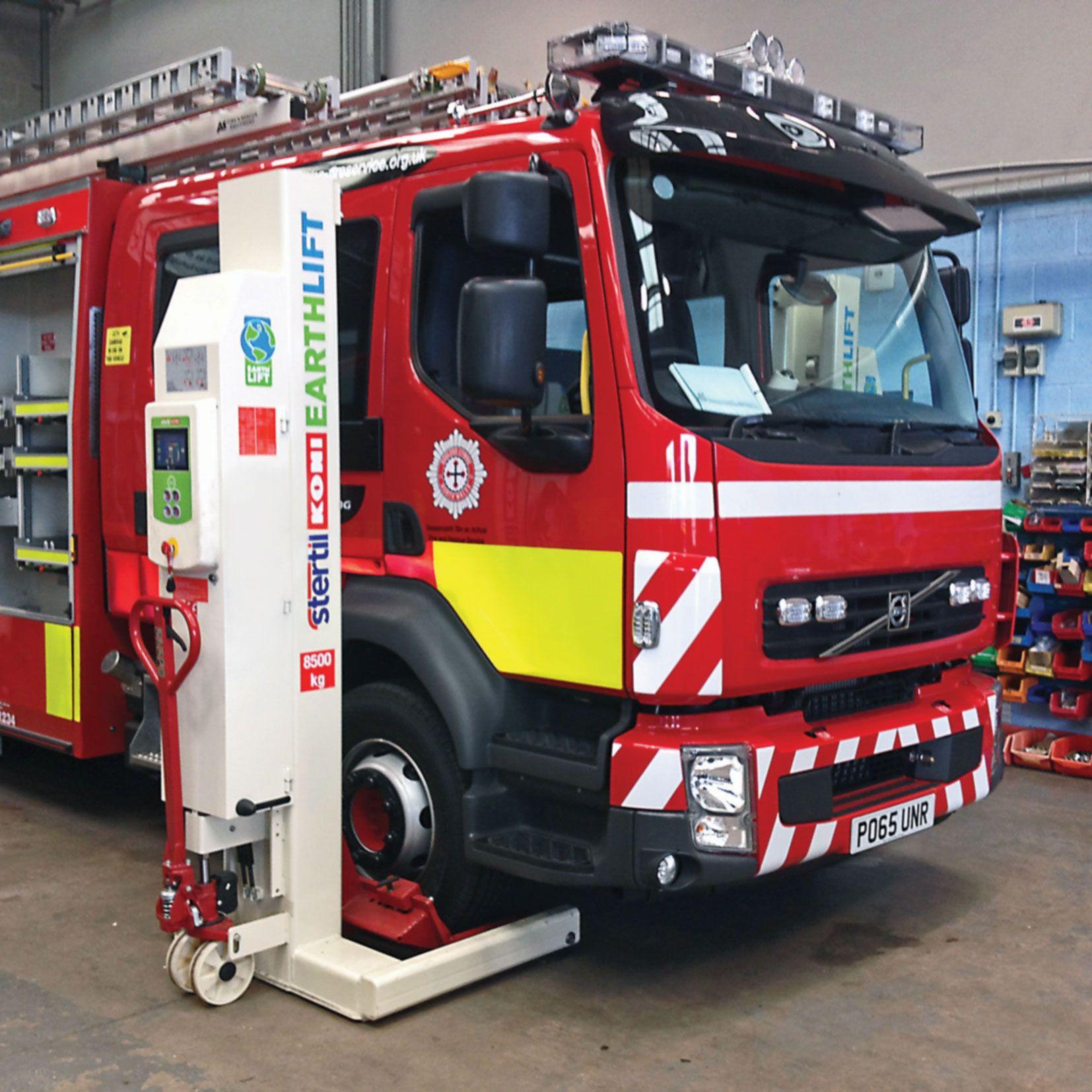 The principle of the Active Energy Retrieval System is as brilliant as it is simple - to use the energy generated by the raised vehicle as it comes back down: in other words, to regain the gravitational energy. The new system increases the number of lifting cycles by about 35%, compared to a fully-charged set of wireless mobiles under maximum load. In addition to the reduction in power consumption, the Earthlift’s batteries need less recharging, thus also increasing productivity and reducing costs.

The absence of cables provides maximum access to vehicles, with no risk of tripping, and also makes the installation of the columns quicker and simpler. The Earthlift’s variable raising and lowering speeds mean that vehicles can be positioned extremely accurately which can be particularly important when removing or replacing heavy components such as engines and transmissions. Furthermore, this novel lift uses bio-degradable hydraulic oil that allows 98% of it to be recycled at the end of its long life.

It provides maximum visual information about every lifting operation - all at the fingertips of the technician. For added safety and performance, the eBright smart control system also shows how many columns in the set are being used, the battery status of each column and when the mechanical locks are engaged.

“As one of the UK’s emergency services, we can’t compromise on the quality of our operation and that’s also true of the equipment we rely upon to keep us ready for action at all times,” says Dave Bond, Head of Fleet and Engineering at North Wales Fire & Rescue Service. “When the time came to replace our existing Stertil Koni wireless mobile column lifts, we had no hesitation in specifying the two new Earthlifts. As expected, they are extremely easy to use, versatile and reliable.Also, the efficiency of the Active Energy Retrieval System provides real energy savings which gives us a definite ‘thumbs up’ from our performance assessment colleagues.”